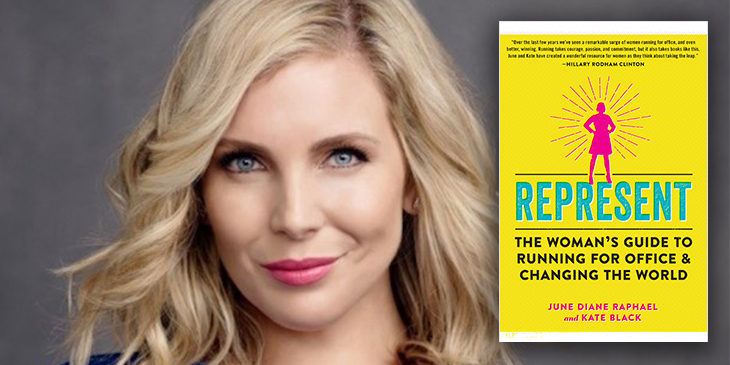 There are approximately 500,000 elected offices in our nation—and June Diane Raphael and Kate Black want to help women run for them. They take Town Hall’s stage with insight from their co-authored book Represent: The Woman’s Guide to Running for Office and Changing the World. Raphael and Black present this energetic, interactive, and inspiring step-by-step guide structured around a 21-point document called “I’m Running for Office: The Checklist.” They’re joined onstage in conversation with Seattle’s Mayor Jenny Durkan. Together, Raphael, Black, and Durkan delve into the nuts and bolts of where to run, how to tackle fundraising, and the details of filing deadlines, as well as issues like balancing family and campaigning, managing social media, and more. Sit in for an enlightening and practical exploration of what it looks like to be a woman running for office.

Kate Black is currently a policy advisor in the federal government and formerly the Chief of Staff and Vice President of Research at EMILY’s List, the largest resource for women in politics. She served as Executive Director of American Women, a nonpartisan research organization working to uplift the voices of women and the issues they care about. She has helped elect candidates up and down the ballot and across the country.

June Diane Raphael is an actress, comedian, screenwriter, producer, podcaster, and most recently activist. She has appeared in dozens of films and television shows and is a veteran of Upright Citizens Brigade. Together with her husband, Paul Scheer, she hosts the popular podcast How Did This Get Made?

Jenny Durkan is the 56th Mayor of Seattle and the first woman to lead the city in nearly a century. Prior to becoming Mayor, Durkan was a civic leader and nationally-recognized attorney. From 2009 to 2014, she served as the U.S. Attorney for the Western District of Washington, becoming the first openly gay U.S. Attorney in our country’s history.