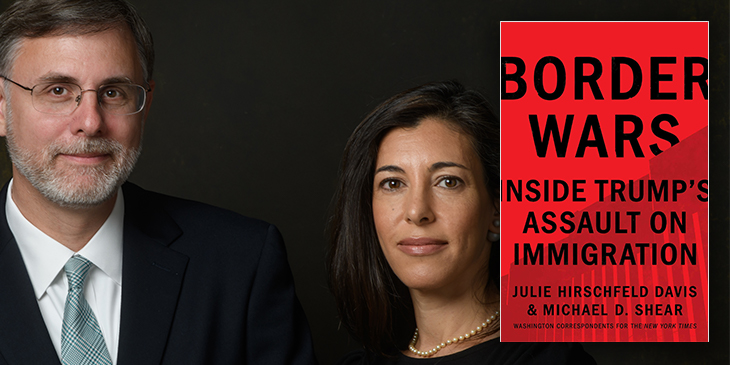 As his campaign rhetoric in the 2018 midterms demonstrated, no issue matters more to Donald Trump than immigration. And no issue—with the possible exception of his opposition to Robert Mueller’s investigation of his 2016 campaign—better defines his administration. Julie Hirschfeld Davis and Michael D. Shear have covered the Trump administration from its earliest days. Now they join us at Town Hall to offer us a glimpse inside the White House with their book Border Wars, documenting how Trump and his allies blocked asylum-seekers and refugees, separated families, threatened deportation, and sought to erode the longstanding bipartisan consensus that immigration and immigrants make positive contributions to America.

In conversation with Marcos Martinez, the Executive Director of Casa Latina, Davis and Shear contend that Trump has used immigration to stoke fears (“the caravan”), attack Democrats and the courts, and distract from negative news and political difficulties. They highlight ways that Trump has used incendiary rhetoric and preyed on the imaginations of many Americans in an attempt to falsely elevate illegal immigration into a national crisis. Join Davis, Shear, and Martinez for insider accounts filled with previously unreported stories that reveal how Trump’s decision-making is driven by gut instinct and marked by disorganization, paranoia, and a constantly feuding staff.

Julie Hirschfeld Davis is the congressional editor at The New York Times and deputy Washington editor. She has covered politics and policy from Washington for twenty-two years. She joined the Times in 2014 as a White House correspondent after stints at Bloomberg News, the Associated Press, The Baltimore Sun, and Congressional Quarterly. She won the 2009 Everett McKinley Dirksen Award for Distinguished Reporting of Congress

Michael D. Shear is a White House correspondent in The New York Times Washington bureau, where he covers President Trump. A veteran political correspondent, before coming to the Times in 2010, he spent eighteen years writing about local, state and national politics at The Washington Post, where he was also part of the Pulitzer Prize-winning team that covered the Virginia Tech shootings in 2007.

Marcos Martinez is the Executive Director of Casa Latina, a community organization dedicated to empowering low-wage Latino immigrants to move from economic insecurity to economic prosperity and to lift their voices to take action around public policy issues that affect them.