Skip to content
In The Moment Podcast, Ep. 136
Joel Simon and Robert Mahoney with Katy Sewall
How Censorship and Lies Made the World Sicker and Less Free 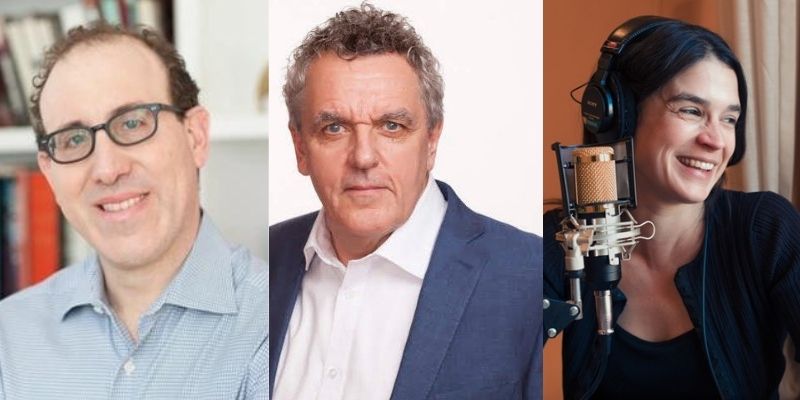 As COVID-19 began to spread around the world in 2020, so did a steady stream of information — and disinformation. Running parallel to the pandemic was an “infodemic,” a digital and physical deluge of information that resulted in mass confusion and censorship. In their new book,The Infodemic, authors Joel Simon and Robert Mahoney lay bare the mechanisms of a modern brand of “censorship through noise” that moves beyond traditional means of state control (jailing critics and restricting the flow of information, for example) to open the floodgates of misinformation. The result? A public overwhelmed with lies and half-truths.

Simon and Mahoney have traveled the world for many years defending press freedom and journalists’ rights as the directors of the Committee to Protect Journalists. They’ve charted COVID censorship beginning in China, through Iran, Russia, India, Egypt, Brazil, and inside the Trump White House. They argue that increased surveillance in the name of public health, the collapse of public trust in institutions, and the demise of local news reporting all contributed to help governments hijack the flow of information and usurp power. Through vivid characters and behind-the-scenes accounts, Simon and Mahoney argue that under the cover of a global pandemic, governments have undermined freedom and taken control — and that this new political order may be the legacy of the disease.

Truth may seem like a simple concept, but Simon and Mahoney highlight how complex it really is. What do you consider a fact? How do you know what a fact is? In this installment of Town Hall’s In the Moment podcast, radio host Katy Sewall interviews Simon and Mahoney about these questions in the context of today’s pandemic and political powers.

Joel Simon is a fellow at the Tow Center for Digital Journalism at Columbia Journalism School and formerly the Executive Director of the Committee to Protect Journalists. Before joining CPJ, he worked as a journalist in Latin America and California. He is the author of three books, including We Want to Negotiate: The Secret World of Hostages, Kidnapping, and Ransom, also from Columbia Global Reports. He lives in Brooklyn, New York.

Robert Mahoney is Executive Director of the Committee to Protect Journalists. He was a Reuters correspondent with postings in Southeast Asia, West Africa, India, Israel, France and Germany. This is Robert’s first book. He lives in New York City.

Katy Sewall is a back-up announcer/host for KUOW and a feature reporter. She’s a PRINDI award-winning producer who trained with Radiolab and toured with A Prairie Home Companion. Her work has appeared on The Takeaway, Here & Now, the BBC, and more. Katy spent nine years as the Senior Producer of Weekday with Steve Scher and is currently the host and creator of the international podcast The Bittersweet Life.