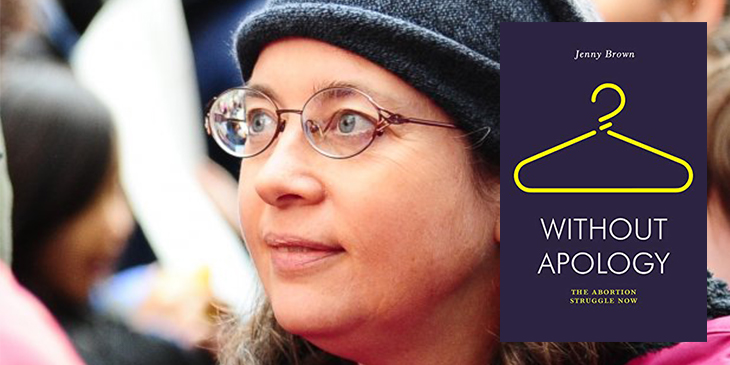 With an anti-abortion majority in the Supreme Court and several states with only one abortion clinic, many reproductive rights activists are on the defensive. Organizer and author Jenny Brown joins us with Without Apology: The Abortion Struggle Now, a rallying cry for modern abortion rights movements. In conversation with Amelia Bonow, activist and founder of #ShoutYourAbortion, Brown highlights the history of legal abortion in the US up until 1873—and the century of illegal abortion that followed. Brown offers us a spirited exploration of how the women’s liberation movement of the 1960s won abortion rights. Drawing inspiration and lessons from that radical movement, Brown illuminates the struggle for abortion rights the world over—including the successful fight to make the morning-after pill available over the counter and the recent mass movement to repeal Ireland’s abortion ban.

Brown argues that organizers need to stop emphasizing rare, tragic cases and deferring to experts and pollsters, and get back to the basic ideas that won abortion in the first place: Women telling the full truth of their own experience, arguing to change minds, and making abortion and birth control a keystone demand in the movement for women’s freedom. Sit in with Brown for a thorough history and forward-looking roadmap for advocates everywhere in the centuries-long struggle for abortion rights.

Jenny Brown was a leader in the fight to get the morning-after pill over the counter in the US and a plaintiff in the winning lawsuit. She is co-author of Women’s Liberation and National Health Care: Confronting the Myth of America. While editor at Labor Notes magazine, she coauthored How to Jump-Start Your Union: Lessons from the Chicago Teachers. She writes, teaches, and organizes with the feminist group National Women’s Liberation and is the author of Birth Strike: The Hidden Fight over Women’s Work.

Amelia Bonow is an activist, author, and cofounder of Shout Your Abortion. Her writing has appeared in The New Republic, Salon, BUST Magazine, and Huffington Post, and she is the co-editor of SYA’s eponymously titled book. She proudly serves on the Board of Directors at the Abortion Care Network, as well as Dr. Leroy Carhart’s AbortionClinics.Org.