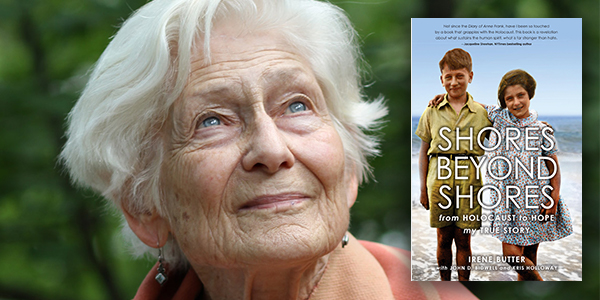 Irene Butter is one of the few Holocaust survivors still alive today. She has shared the stage with the Dalai Lama, Elie Wiesel, Desmond Tutu, and other peacemakers—but she has never told her entire story until now. She takes the stage to discuss her amazing life story with excerpts from her book Shores Beyond Shores. Joined in conversation with UW’s professor Richard Block, Irene brings a fresh, moving tale to a still vital genre. Through her her relationship with her brother Werner, Irene offers us a chance to navigate the horrors of concentration camp life with a trusted friend. She recalls her connection to an orphan Polish boy and to Lex—her first love—allowing us to explore a displaced persons camp in Algeria while centering on the essential human struggles of this memoir. Irene and Block call us together for a rare glimpse into the strength of the human spirit and the intimacy of family life during a time in history when many families fell apart.

Irene Butter was born in Berlin and grew up as a Jewish child in Nazi-occupied Europe. A survivor of two concentration camps, she came to the U.S. in 1945. Since the late 80’s she taught students about the Holocaust and the lessons she learned during those traumatic years. Irene is a co-founder of the Raoul Wallenberg Medal & Lecture series at the University of Michigan, and one of the founders of Zeitouna, an Arab/Jewish Women’s Dialogue group in Ann Arbor.

Richard Block is Associate Professor of Germanics at the University of Washington. His fields of study include Jewish Studies, German Studies, Literature, and 19th- and 20th-century culture. His work focuses on the way in which texts construct identity, and the ways in which we can place literary, philosophical, and cultural texts in conversation with each other.