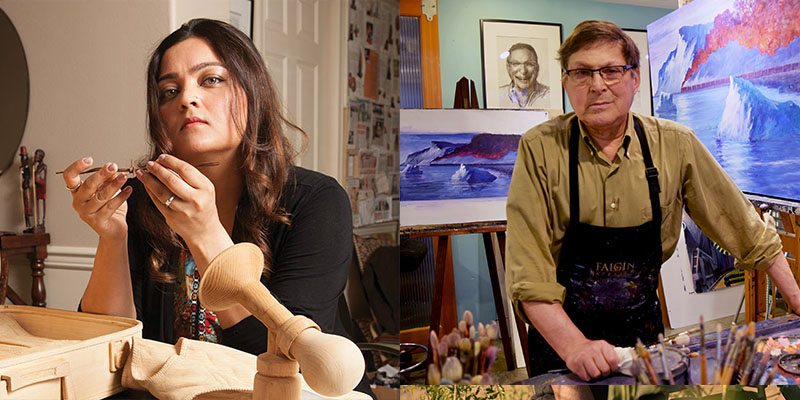 Humaira Abid gathers the ordinary objects from everyday life and transforms them into something extraordinary. Her turned and carved wood sculptures and paintings — known for their exquisite detail — depict human relationships, societal repression, and the consequences of keeping basic truths from being discussed and shared. The beauty and seductive virtuosity of her work offset her political, ironic, provocative, and even scandalous objects and installations.

While much of her art’s subject matter is emotionally intense, Abid hopes to create conversation through it. She says, “I like to start conversations. I like people when they open up and share their stories because I believe when you share your story it encourages another person to share their story.” (Real Change, 2017)

Together with Gage Academy of Art cofounder Gary Faigin, Abid joins us at Town Hall to discuss the stories and processes behind her work.

Humaira Abid was born and raised in Lahore, Pakistan. She immigrated to the United States in 2008 and now lives and works in Seattle, WA. Abid received her BFA in sculpture and miniature painting from the National College of Arts, Lahore, in 2000. Her works have been exhibited in museums and galleries and documented in publications around the world and reviewed by local, national, and international news media. Abid is the recipient of numerous honors, most recently the 2019 Artist Trust Arts Innovator Award.

Her work has been published in books and other print media and she has been the recipient of prestigious awards and grants. She has lectured widely and participated in residencies and symposia around the world. Two documentary features focused on Abid and her work, produced by the KCTS9 branch of PBS and Seattle Channel, were both nominated for Northwest Emmy Awards. She is represented by Greg Kucera Gallery, Seattle.

Presented by Town Hall Seattle and the Gage Academy of Art.