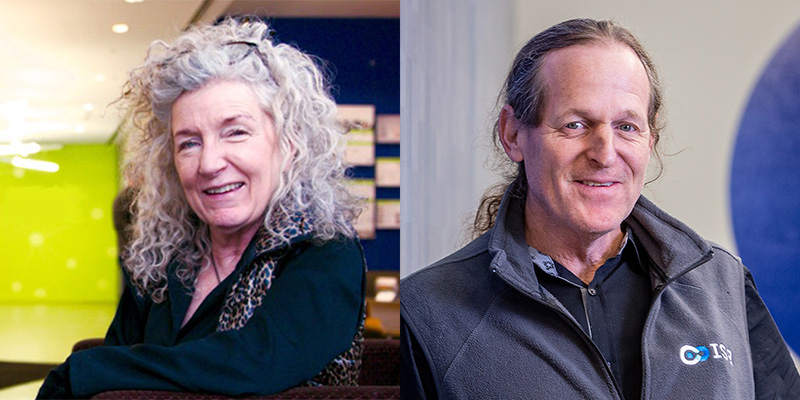 While many would think art and science are two vastly different disciplines, one common driver often motivates them both – curiosity.

Ginny Ruffner – who currently has a retrospective exhibition open at the Bainbridge Island Museum of Art on the topic of “What if?” – has worked at the intersection of art and science for decades. Her curiosity around biological concepts has propelled her to invent answers to “what if?” questions about the nature of the world around us. The experimental works she creates often involve the use of technology and mixed media to create new and imaginative experiences. Her creations are fueled by collaboration and camaraderie with scientists such as ISB President Dr. Jim Heath.

Join us in person at Town Hall Seattle for a conversation with internationally renowned artist Ginny Ruffner and ISB President Dr. Jim Heath. Together, they will explore the opportunities and striking similarities that lie at the intersection of art and science.

Ginny Ruffner is a pioneering American glass artist based in Seattle. She is known for her use of the lampworking technique and for her use of borosilicate glass in her painted glass sculptures. Many of her ideas begin with drawings. Her works also include pop-up books, large-scale public art, and augmented reality. Ruffner was named a Master of the Medium by the James Renwick Alliance in 2007. She received The Glass Art Society’s Lifetime Award in 2019. Ruffner currently has a retrospective exhibition open at the Bainbridge Island Museum of Art on the topic of “What if?”

Dr. Jim Heath is President and Professor at Institute for Systems Biology in Seattle. Heath also has the position of Professor of Molecular and Medical Pharmacology at UCLA. Formerly, he directed the National Cancer Institute-funded NSB Cancer Center, was the Elizabeth W. Gilloon Professor of Chemistry at Caltech, and served as co-director of the Parker Institute for Cancer Immunotherapy at UCLA until 2017.

Presented by Town Hall Seattle and the Institute of Systems Biology. Our community partner for this event is the Bainbridge Island Museum of Art.