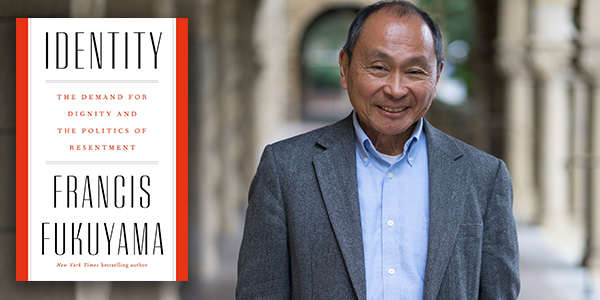 In 2014, Francis Fukuyama wrote that American institutions were in decay, as the state was systematically captured by powerful interest groups. Two years later, political outsiders have risen to power by leaning on direct charismatic connections to “the people,” who are usually defined in narrow terms that offer an irresistible call to an in-group and exclude large parts of the population as a whole.

Now Fukuyama arrives at Town Hall to lend us his perspective from his book Identity: The Demand for Dignity and the Politics of Resentment. Fukuyama asserts that the demand for recognition of one’s identity, which he deems a fundamental human instinct, is a master concept that defines much of world politics today. He tells us that the universal recognition on which liberal democracy is predicated has been increasingly challenged by narrower forms of recognition based on nation, religion, sect, race, ethnicity, or gender. Fukuyama cautions us that these narrower forms of recognition have resulted in the rise of populism, polarization, and intolerant nationalist movements of the sort that have seen a recent resurgence in America. He tells us that we must begin shaping identity on a national scale if we want it to support, rather than undermine, democracy. Join Fukuyama as he delivers a sharp warning: unless we forge a universal understanding of human dignity, we will doom ourselves to continuing conflict.

Francis Fukuyama is the Olivier Nomellini Senior Fellow at Stanford University’s Freeman Spogli Institute for International Studies. He has previously taught at the Paul H. Nitze School of Advanced International Studies at Johns Hopkins University and at the George Mason University School of Public Policy. He is the author of Political Order and Political Decay, The Origins of Political Order, The End of History and the Last Man, Trust, and America at the Crossroads: Democracy, Power, and the Neoconservative Legacy.