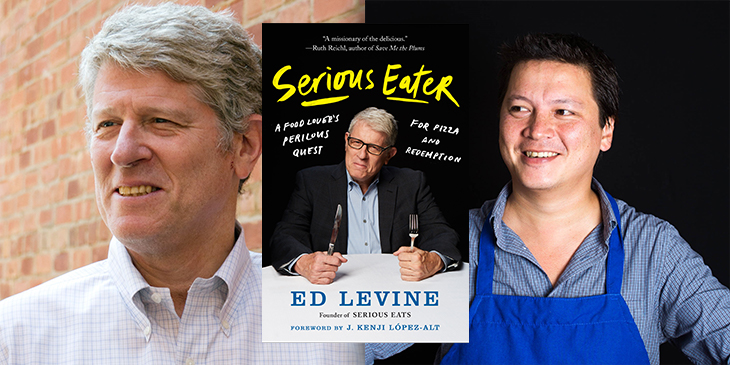 In 2005, freelance food writer Ed Levine sought an unlikely dream: to control his own fate and create a different kind of food publication that would unearth the world’s best bagels, the best burgers, the best hot dogs—the best of everything edible. Levine joins us, in conversation with his Chief Culinary Advisor J. Kenji López-Alt, to tell the story of how he built a community for people who took everything edible seriously, from the tasting menu at Per Se and omakase feasts at Nobu down to mass-market candy, fast food burgers, and instant ramen.

Levine draws on his book Serious Eater, recalling how over a decade ago he created a blog for $100 called Serious Eats—and how the site quickly became a home for foodie obsessives who didn’t take themselves too seriously. He outlines how the site grew in in popularity, attracting talented tasters and recipe developers even as it stood on unsteady ground and felt like every day could be its last. Levine reveals how stubbornness and passion for Serious Eats put his marriage, career, and relationships with friends and family at risk in order to keep his dream alive. Sit in with Levine and López-Alt for the mouthwatering and heartstopping story of building—and almost losing—one of the most acclaimed and beloved food sites in the world.

Ed Levine is the founder (his employees affectionately call him the overlord) of Serious Eats, as well as creator and host of the Serious Eats podcast, Special Sauce. In 2016, Ed was inducted into the James Beard Foundation’s Who’s Who of Food & Beverage in America.

J. Kenji López-Alt is the Chief Culinary Advisor for Serious Eats, as well as chef and partner at Wursthall, a German-inspired California beer hall and restaurant in San Mateo. His first book, The Food Lab: Better Home Cooking Through Science is a New York Times Bestseller.