A free post-event discussion is available after this event. See below for more information and registration.

“I was taught to treat everyone the same.” “I don’t see color.” “My parents voted for Obama.” You’ve probably heard similar statements uttered over lunchtime convos, or while hanging out with friends and family. But those casual remarks really indicate that when white people have the opportunity to think and talk about race and racism, more often than not, they don’t know how.

How can we better sow the seeds for fruitful conversation and grow meaningful change? In a new adaptation of Dr. Robin DiAngelo’s best-selling book White Fragility, anti-racist educators Toni Graves Williamson and Ali Michael explain the concept of systemic racism to young adult readers and how to recognize it in themselves and the world around them. Along the way, Williamson and Michael provide tools for taking action to challenge systems of inequity and racism as they move into adulthood.

Filled with personal stories from the multiracial creators, discussion prompts, illustrations, and profiles of scholars and activists, this reimagined book gives young adults (and older readers, too!) the tools to ask questions, engage in dialogue, challenge their ways of thinking, and take action to create a more racially just world.

Dr. Robin DiAngelo is an Affiliate Associate Professor of Education at the University of Washington. In addition, she holds two Honorary Doctorates. Her area of research is in Whiteness Studies and Critical Discourse Analysis, tracing how whiteness is reproduced in everyday narratives. She is a two-time winner of the Student’s Choice Award for Educator of the Year at the University of Washington’s School of Social Work. She has numerous publications and books, including the award-winning Is Everybody Really Equal?: An Introduction to Key Concepts in Critical Social Justice Education, co-written with Özlem Sensoy, and White Fragility: Why It’s So Hard For White People To Talk About Racism. Released in June of 2018, White Fragility debuted on the New York Times Bestseller List, where it remained for over three years and has been translated into 12 languages. Her follow-up book, released in June of 2021, is Nice Racism: How Progressive White People Perpetuate Racial Harm. Her work or interviews have been featured in The New York Times, The Guardian, CNN, NPR, PBS, and The BBC, among many other forums.​

Erin Jones is an Independent Education and Systems Consultant and public speaker who has been involved in and around schools for 30 years. She has taught in a variety of environments to some of the most diverse communities in the nation, and has been recognized for her outstanding work as an educator both locally and nationally. Jones has also worked as an executive for two state superintendents, worked in college access at the school district level, and ran for state superintendent in 2016 – the first Black woman to run for any state office in Washington state. Today, Erin is a speaker and trainer who has logged thousands of hours delivering keynotes, speaking at schools, and providing training to government agencies and nonprofits. She published a book in 2021 entitled Bridges to Heal US, Stories and Strategies for Racial Healing. 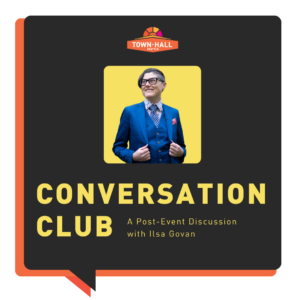 Stick around after Dr. DiAngelo’s talk for an opportunity to process and personalize the content of the event. In a small group setting, guest facilitator Ilsa Govan, author of What’s Up With White Women?, will create space for participants to go further with the topics presented onstage.

Please RSVP here. Seats for the discussion are limited. Conversation Club will be held in person only in The Mehdi Reading Room, and will not be recorded.