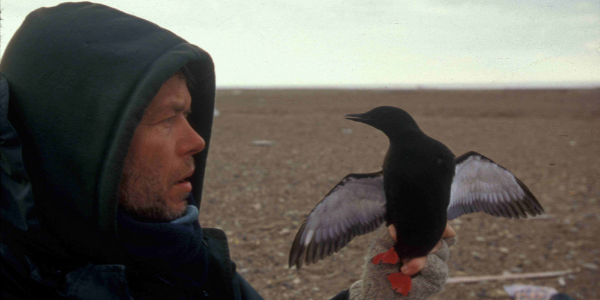 There is an increasing awareness of current and anticipated devastation from the impacts of global warming and climate change and the need for governmental programs to address the threat. The current Netflix blockbuster Don’t Look Up uses the analogy of an approaching comet to parody the institutional and cultural inertia of the government, media, and public in addressing an existential threat. No analogy is needed for George Divoky, who has studied a colony of an ice-dependent seabird, the Mandt’s Black Guillemot, in Arctic Alaska for 47 years. Loss of Arctic sea ice has led to a 90% reduction in colony size since the 1970s and its likely disappearance by mid-century.

The evening will begin with an in-person reception starting at 6 pm before the 7 pm presentation (in-person and virtual), which will include an overview of Divoky’s half-century of observations of a melting Arctic and his experiences informing the public, government, and the media of the magnitude and immediacy of climate change in the Arctic. Additionally, science educator Katie Morrison and expeditionary artist Maria Coryell-Martin will discuss and share the lesson plans and art they have created to inform students and the public about Arctic change.

Dr. George Divoky is an Arctic ornithologist whose research has received national and international attention, including a feature story in The New York Times Magazine and appearances on Late Night with David Letterman, Nightline, and Scientific American Frontiers with Alan Alda. His work was featured in the UK Royal National Theatre climate change play, Greenland. He is the Director of Cooper Island Arctic Research, the research arm of the nonprofit Friends of Cooper Island, which maintains the Cooper Island research.

Presented by Friends of Cooper Island.