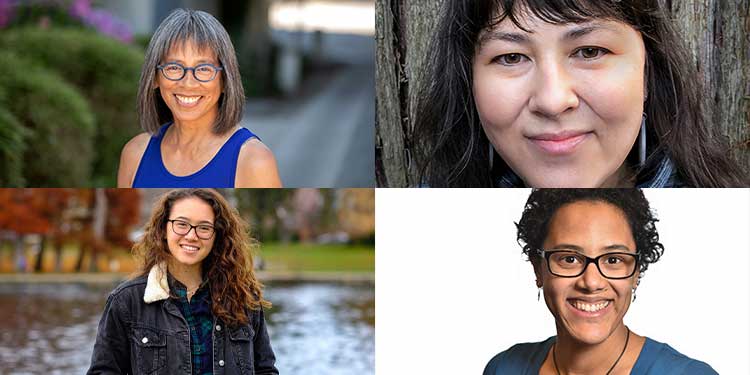 In Living Color: Angie Rubio Stories, author Donna Miscolta traces the social education that a Mexican American girl receives as she experiences and responds to microaggressions and systemic racism in and out of school. Unfortunately, though Living Color is fiction, many of the incidents depicted in Angie Rubio’s life are inspired or derived from Miscolta’s own girlhood. To further explore the topics of racism, family, and identity, Miscolta participated in a class with Anne Liu Kellor called “Shapeshifting: Reading and Writing the Mixed-Race Experience.” They join us now, along with two other writers from the class, Rebecca Delacruz-Gunderson and Sarah McQuate, to discuss the course and the importance of writing to see ourselves.

The panel of four—all of whom identify as mixed-race—share why they took the class, and what resonated most for them in terms of the readings, prompts, and discussions. What themes occupy mixed-race writers and what does writing about them resolve? What awareness of themselves as mixed-race writers did they bring to the class, and what did they take away? What do they think is their biggest obstacle as a mixed-race writer? Who are they writing for? They examine all of these questions and more. Join them for readings from their work, and an essential conversation about identity and the significance of art that provides mirrors, windows, and doors.

This project was supported, in part, by a grant from 4Culture.

Donna Miscolta’s third book of fiction Living Color: Angie Rubio Stories was published in September 2020. Her story collection Hola and Goodbye was published in 2016. She’s also the author of the novel When the de la Cruz Family Danced. She has work forthcoming in Indomitable/Indomables: A multigenre Chicanx/Latinx Women’s Anthology. Find her at donnamiscolta.com

Sarah E. McQuate is a half-Black, half-white scientist turned science writer. McQuate has science stories published in a variety of outlets, including Nature and Science. McQuate lives in Seattle and writes about research news from the University of Washington’s College of Engineering and Information School. She is also working on telling her own story. You can learn more about Sarah at sarahmcquate.com.

Anne Liu Kellor is a mixed-race Chinese American writer, editor, coach, and teacher based in Seattle. She is the recipient of fellowships from Hedgebrook, Seventh Wave, Jack Straw Writers Program, 4Culture, and Hypatia-in-the-Woods. Her essays have appeared in publications such as Longreads, Fourth Genre, Witness, New England Review, and more. Kellor’s memoir, Heart Radical: A Search for Language, Love, and Belonging, traces her migrations between China, Tibet, and America, and is forthcoming in September 2021. You can pre-order or learn more at www.anneliukellor.com

Rebecca Delacruz-Gunderson is a half Filipina, half White Washingtonian who loves reading, running, writing, and hiking. She has worked in college counseling at The Bush School, served as Field Director for State Senator T’wina Nobles’ campaign, lived in Singapore for five months as the employee of a startup, tutored local students, and taught essay writing classes. She aspires to be a high school English teacher and is very excited to begin her Masters in English at the University of British Columbia this fall.