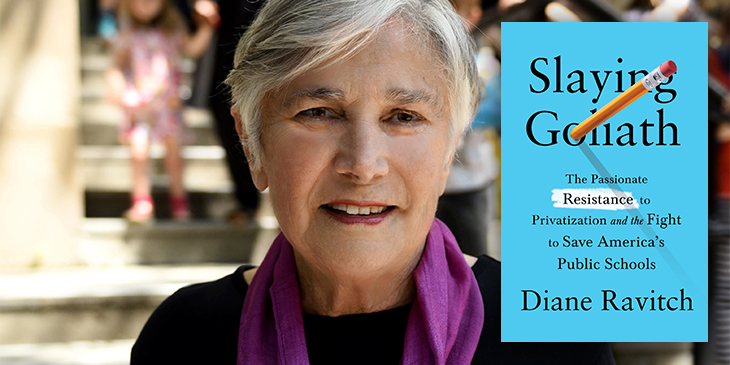 According to Diane Ravitch, citizens across America are successfully fighting to stop corporations from privatizing our nation’s public schools. Ravitch joins us with insight from her book Slaying Goliath: The Passionate Resistance To Privatization And The Fight To Save America’s Public Schools. She highlights how parents, teachers, activists, bloggers, religious leaders, and others are stepping forward to fight against the disruption of one of America’s most fundamental public institutions. Ravitch identifies corporate interests, political voices, and economic disruptors who believe America’s schools should be run like businesses, modeling the structure of our schools on a gig economy in which students are treated like customers or products and teachers are incentivized with threats and bonuses. Join Ravitch to learn about the nationwide story of brave individuals who, spurred on by the power of ideas and passion, are fighting back to successfully keep their public schools alive.

Diane Ravitch is a research professor of education at New York University and the author of eleven books, including The Language Police: How Pressure Groups Restrict What Students Learn and Reign of Error: The Hoax Of The Privatization Movement And The Danger To America’s Public Schools.

Jesse Hagopian teaches Ethnic Studies and is the co-adviser to the Black Student Union at Garfield High School. He is an editor for the social justice periodical Rethinking Schools and is the co-editor of the book Teaching for Black Lives.