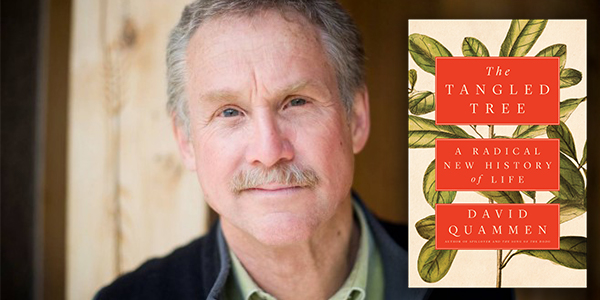 In the mid-1970s, scientists began using DNA sequences to reexamine the history of all life. Perhaps the most startling discovery in this new field—the study of life’s diversity and relatedness at the molecular level—is horizontal gene transfer (HGT), the movement of genes across species lines. With insight to radically shift our understanding of the tree of life, we are joined by naturalist author and columnist David Quammen with wisdom from his book The Tangled Tree: A Radical New History of Life. Expand your knowledge of the human genetic awakening as Quammen guides us through stories of technologies and new discoveries that are transforming our understanding of evolution, life’s history, and human nature.

David Quammen is a journalist and author of fifteen books including The Tangled Tree, The Song of the Dodo, The Reluctant Mr. Darwin, and Spillover, a finalist for the National Book Critics Circle award. He has written for Harper’s, The Atlantic, Rolling Stone, The New York Times Book Review, Outside, and Powder, among other magazines, and is a contributing writer for National Geographic. He wrote the entire text of the May 2016 issue of National Geographic on the Greater Yellowstone ecosystem—the first time in the history of the magazine that an issue was single-authored.