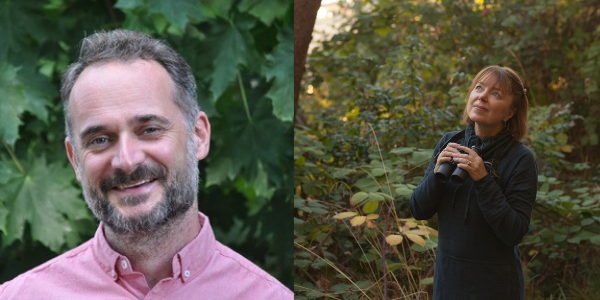 Our world constantly vibrates with sound, from the delicate flap of an insect’s wings to the thunderous roar of a rocket launching into space. There’s the spring chorus of frogs. The sputter of a creek and the whoosh of a sudden breeze. Songs, music, and speech. But the sounds of today aren’t necessarily the same sounds that our ancestors encountered. How have sounds changed? What might be missing from our present and future sonic experiences?

In his new book, Sounds Wild and Broken, biology professor David Haskell explores how the wonders of sound came to be on a journey through our planet’s history. Tracing a sonic path from animal song to modern concert halls, he illuminates how sounds emerged and evolved alongside all of Earth’s living things. But despite the explosive creation of sounds over time, Haskell points out that there is also erasure; threats to sonic diversity impact our forests, oceans, and experiences as human beings. Haskell considers how the loss of sounds can make the world less creative, just, and beautiful, prompting the question: How can reverence for sound help guide us in a rapidly-changing world?

David Haskell is a professor of biology and environmental studies at the University of the South and a Guggenheim Fellow. His work integrates scientific, literary, and contemplative studies of the natural world. He is the author of The Songs of Trees (2017), which won the John Burroughs Medal for Outstanding Nature Writing. His first book, The Forest Unseen (2012), was a finalist for the Pulitzer Prize and the PEN/E.O. Wilson Literary Science Writing Award, and was honored with the 2013 Best Book Award from the National Academies, the National Outdoor Book Award, and the Reed Environmental Writing Award. You can listen to a collection of sounds from his most recent book, Sounds Wild and Broken, here.

Lyanda Lynn Haupt is an award-winning author, naturalist, ecophilosopher, and speaker whose writing is at the forefront of the movement to connect people with nature and wildness in their everyday lives. Her newest book is Rooted: Life at the Crossroads of Science, Nature, and Spirit  (2021).