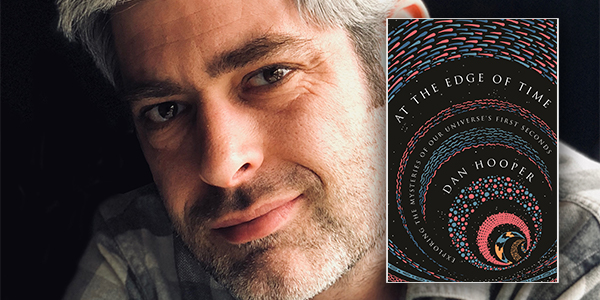 Scientists in the past few decades have made crucial discoveries about how our cosmos evolved over the past 13.8 billion years. But there remains a critical gap in our knowledge: we still know very little about what happened in the first seconds after the Big Bang. Astrophysicist Dan Hooper reveals new understanding about this mysterious period of time at the beginning of cosmic history with his book At the Edge of Time.

Hooper grapples with the extraordinary and perplexing questions that scientists are asking about the origin and nature of our world. Hooper examines how we are using the Large Hadron Collider and other experiments to re-create the conditions of the Big Bang and test promising theories for how and why our universe came to contain so much matter and so little antimatter. He shares insight from the precipice of new discoveries about how dark matter was formed during our universe’s first moments, and how new telescopes are allowing us to lift the veil on the era of cosmic inflation which led to the creation of our world as we know it. Join Hooper for a chance to wrestle with the mysteries surrounding the Big Bang, and an accessible investigation of our universe and its origin.

Dan Hooper is a senior scientist and the head of the Theoretical Astrophysics Group at the Fermi National Accelerator Laboratory and a professor of astronomy and astrophysics at the University of Chicago. He is the author of Dark Cosmos and Nature’s Blueprint.