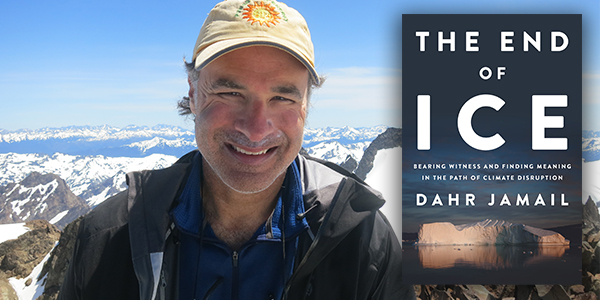 After nearly a decade overseas, acclaimed journalist Dahr Jamail returned to America to renew his passion for mountaineering—only to find that the slopes he once climbed have been irrevocably changed by climate disruption. He embarked on a worldwide journey to see for himself the consequences of climate change across the globe—from Alaska to Australia’s Great Barrier Reef to the Amazon rainforest. Now his travels have taken him to our stage, where he presents his findings in The End of Ice: Bearing Witness and Finding Meaning in the Path of Climate Disruption.

Jamail reveals reporting from the front lines of this crisis, accompanied by climate scientists and people whose families have a centuries-long history of fishing, farming, and living in the areas he visited. Jamail shares his renewed passion for the planet’s wild places, and invites us to witness a one-of-a-kind photographic account of the catastrophic reality of our situation and the incalculable necessity of relishing this vulnerable, fragile planet while we still can.

Dahr Jamail, a Truthout staff reporter, is the author of Beyond the Green Zone: Dispatches from an Unembedded Journalist in Occupied Iraq. Jamail has reported from the Middle East over the last ten years, and he has won the Martha Gellhorn Prize for Journalism.