Conor Dougherty with Alan Durning
The Fight for Housing in America 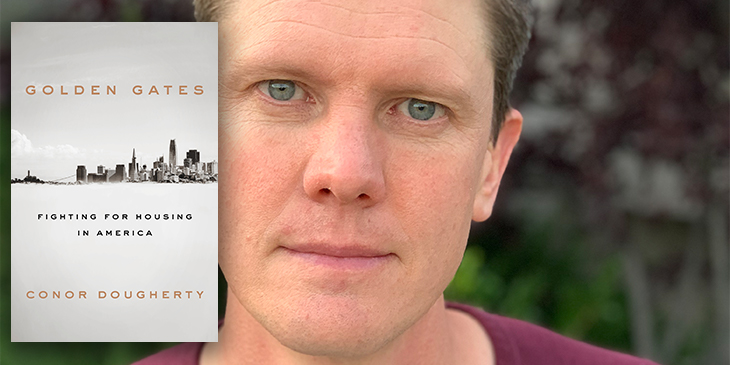 Spacious and affordable homes used to be the hallmark of American prosperity. But according to journalist Conor Dougherty, punishing rents and the increasingly prohibitive cost of ownership have turned housing into the foremost symbol of inequality and an economy gone wrong. Dougherty leads us on a fact-finding expedition to the West Coast epicenter of America’s housing crisis with perspectives from his book Golden Gates: Fighting For Housing In America. He joins in conversation with Alan Durning, founder of Sightline Institute.

Evoking the adage that California is a glimpse of our nation’s future, Dougherty and Durning tell a cautionary tale of the San Francisco Bay Area, where fleets of private buses ferry software engineers past a sea of tarp-and-plywood shanties. Dougherty outlines decades of history and economic forces that brought us to this pivotal moment, and introduces us to the activist uprisings that have risen in tandem with housing costs. He tells the stories of a struggling math teacher who builds a political movement dedicated to ending single-family-house neighborhoods, a teenage girl who leads her apartment complex against their rent-raising landlord, a nun who tries to outmaneuver private equity investors by amassing a multimillion-dollar portfolio of affordable homes, and many more. Join Dougherty and Durning for a glimpse of a vast political realignment during this moment of rapid technological and social change that may redefine the lives and homes of Americans everywhere.

Conor Dougherty is an economics reporter at The New York Times. His work focuses on the West Coast, real estate and wage stagnation among U.S. workers. Dougherty has covered economics and real estate on and off for a decade at both The Times and The Wall Street Journal.

Alan Durning is the founder of Sightline Institute and co-author of more than ten Sightline books, including This Place on Earth 2002: Measuring What Matters, The Car and the City, and Unlocking Home: Three Keys to Affordable Communities.