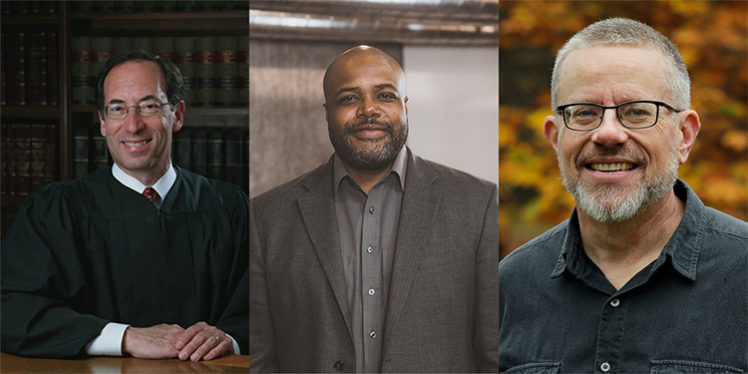 A recent vacancy in our highest court and continued confusion around fact and fiction set the stage for the latest Civic Cocktail. Settle in at home and join us virtually as we discuss Future Justice and Perception vs. Reality with our community leaders and neighbors. Senior U.S. District Judge Robert Lasnik discusses the U.S. Supreme Court vacancy, possible future rulings, and the impact here in our home state. Then, Converge Media’s Omari Salisbury and the Associated Press’ Ted Warren share about the influential role that journalism plays in creating local and national narratives that impact our democracy—from arson rumors and Antifa to Attorney General Barr’s recent labeling of Seattle, Portland, and New York as anarchist cities.

Judge Robert S. Lasnik has been a leader in the state and federal judiciary in his 30 years on the bench. He was appointed to the U.S. District Court by President Bill Clinton in 1998 and served as Chief Judge of the Western District of Washington from 2004 to 2011. From 2010 to 2015, he served on the Judicial Conference of the United States as the district judge representative from the Ninth Circuit. Judge Lasnik graduated from Brandeis University with a degree in psychology and sociology, and later obtained two master’s degrees from Northwestern University in journalism and counseling. He is a graduate of the University of Washington School of Law, where he also later instructed.

Omari Salisbury is the COO and Founder of Converge Media, a leading producer of content for black and urban audiences. The son of the first black-owned photography studio in the Northwest, Omari Salisbury hails from a long line of visual storytellers. 52 countries and counting, Omari is a true global citizen working in media across the continent of Africa, the middle east, and Europe for Media Zone, Clouds Media Group, and Status Communications. No matter where Omari finds himself across the globe, he will always call Seattle home. Omari is a proud native of Seattle’s Central District and a graduate of James A. Garfield High School.

Ted Warren is a staff photographer and videographer with the Associated Press in Seattle. He was born and raised in Mosco, Idaho, and began his professional career in 1993 with a photo internship at the Los Angeles Times while completing his degree at the University of Texas at Austin. Warren particularly enjoys large-scale environmental and social-issue stories, and covering major sporting events both nationally and internationally. In 2020, Warren’s work has centered on covering the COVID-19 pandemic, Black Lives Matter protests and the CHAZ/CHOP zone in Seattle, and the return of professional sports to Seattle.