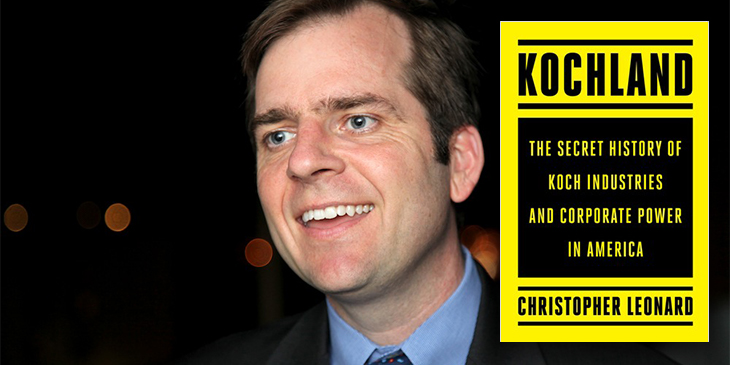 The annual revenue of Koch Industries is bigger than that of Goldman Sachs, Facebook, and U.S. Steel combined. But few people know much about Koch Industries—and according to investigative journalist Christopher Leonard, that’s because the billionaire Koch brothers want it that way. Leonard makes his way to Town Hall’s stage with insight from his book Kochland, an exploration of Koch Industries seven years in the making. In conversation with Seattle Review of Books co-founder Paul Constant, Leonard outlines how, for five decades, Koch Industries has quietly operated in deepest secrecy with a view toward very, very long-term profits. Leonard asserts that the corporation’s strategies for success have led to widespread fallout in our country—from the disempowerment of unions to the widening of the income divide to the stalling of progress on climate change. Leonard invites us to experience an ambitious tale of how one private company consolidated power over half a century, and how in doing so it helped transform capitalism into something that feels deeply alienating to modern Americans.

Christopher Leonard is a business reporter whose work has appeared in The Washington Post, The Wall Street Journal, Fortune, Slate, and Bloomberg Businessweek, and is the author of The Meat Racket, a Washington Post notable book.

Paul Constant is a co-founder of the Seattle Review of Books. He has written for The Progressive, Newsweek, Re/Code, the Utne Reader, the Los Angeles Times, the Seattle Times, the New York Observer, and many North American alternative weeklies.