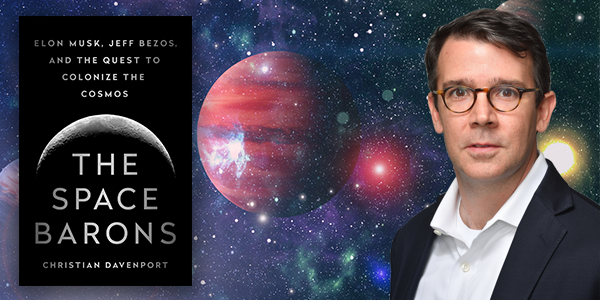 Listen to our pre-event interview with Christian Davenport on our digital stage.

Nearly a half-century after Neil Armstrong walked on the moon, a group of billionaire entrepreneurs, jocularly referred to as the “Space Barons,” are pouring their fortunes into the resurrection of the American space program. Washington Post staff writer Christian Davenport brings to our stage the remarkable accounts of risk and high adventure by these four billionaires—Elon Musk, Jeff Bezos, Richard Branson, and Paul Allen—sharing excerpts collected in his book The Space Barons: Elon Musk, Jeff Bezos, and the Quest to Colonize the Cosmos. Drawing on years of investigation and exclusive interviews with all four of the “Barons,” Davenport brings us a report on the birth of a new Space Age, fueled by some of the world’s richest men as they struggle to end the governmental monopoly on the cosmos. Davenport is joined for an onstage conversation with award-winning science writer and editor Alan Boyle.

Davenport and Boyle discuss the Silicon Valley-style innovation at work to dramatically lower the cost of space travel, and the potential for these programs to send humans even further than NASA has ever achieved. Together they outlines the hardships facing this new space movement: startups warring with established contractors and the entrepreneurs’ personal clashes which threaten to scuttle their private projects before they come to fruition. Join Davenport and Boyle for a comprehensive look at the spacefaring projects funded by the founders of some of the biggest brands in the world, and the potential for these industry-upending titans to aim for the moon, Mars, and beyond.

Christian Davenport is a staff writer at the Washington Post covering the space and defense industries for the financial desk. He is a recipient of the Peabody award for his work on veterans with Traumatic Brain Injury and has been on reporting teams that were finalists for the Pulitzer Prize three times. Before joining the financial staff, Davenport was an editor on the Metro desk, overseeing coverage of local government and politics. As a frequent radio and television commentator, he has appeared on MSNBC, CNN, PBS NewsHour, and several NPR shows, including All Things Considered and Diane Rehm.

Alan Boyle is an aerospace and science editor at Geekwire.com, creator of Cosmiclog.com, and award-winning science writer and space reporter. Formerly the science editor of NBCNews.com, MSNBC, and MSNBC.com, he is the author of The Case for Pluto: How a Little Planet Made a Big Difference.

Presented by Town Hall and Museum of Flight as part of the Science series.