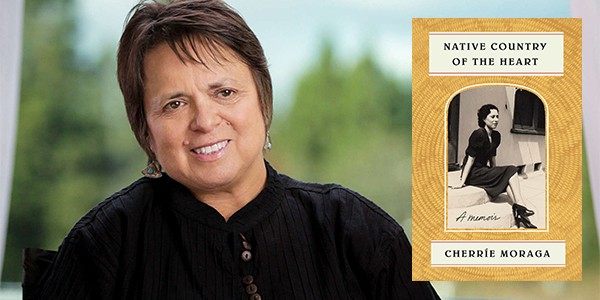 How do we trace the stories of our parents’ lives alongside that of our own self-discovery? Celebrated author and pioneering queer Latina feminist Cherríe Moraga presents Town Hall audiences with her own intergenerational narrative in Native Country of the Heart: A Memoir, charting a personal coming-of-age alongside her mother’s decline, and also tells the larger story of the Mexican American diaspora. She is joined in conversation with queer performance artist and curator Hatlo, as well as Seattle-based artist, writer, and curator Anisa Jackson.

Moraga charts her mother’s journey from an impressionable young girl to a battle-tested matriarch to an old woman suffering under the yoke of Alzheimer’s—while simultaneously tracing her own self-discovery of her gender-queer body and Lesbian identity, as well as her passion for activism and the history of her pueblo. Join Moraga, Hatlo, and Jackson for a reckoning with white American history, and Moraga’s piercing love letter from a fearless daughter to the mother she will never lose.

Cherríe Moraga is a writer and cultural activist whose work serves to disrupt the dominant narratives of gender, race, sexuality, feminism, indigeneity, and literature in the United States. A co-founder of Kitchen Table: Women of Color Press, Moraga co-edited the highly influential volume This Bridge Called My Back: Writings by Radical Women of Color in 1981. She is the recipient of a National Endowment for the Arts Theatre Playwriting Fellowship Award and a United States Artist Rockefeller Fellowship for Literature.

Hatlo is a queer performance maker based in Seattle. Focused on collaborative, interdisciplinary, original work that disrupts dominant narratives, they most often work as a writer, director, dramaturg, performer and co-conspirator.

Anisa Jackson is an artist, writer, curator, and organizer based in Seattle. With a background in geography, Anisa’s research-based practice draws on care ethics and black feminist thought. Their work has appeared as installation, moving image, and as print and digital text.