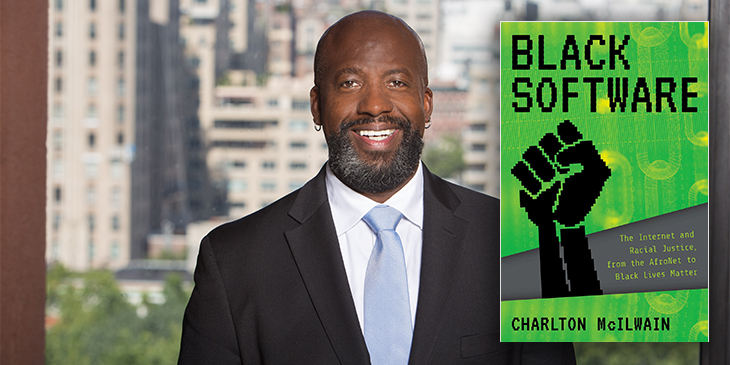 Activists, pundits, politicians, and the press frequently proclaim today’s digitally mediated racial justice activism the new civil rights movement. But according to Charlton D. McIlwain, the story of racial justice movement organizing online is much longer and varied than most people know. With insight from his book Black Software: The Internet and Racial Justice, from the AfroNet to Black Lives Matter, McIlwain chronicles the long relationship between African Americans, computing technology, and the internet.

He argues that the forgotten figures who worked to make black politics central to the internet’s birth and evolution paved the way for today’s explosion of racial justice activism. Starting in the 1960’s, McIlwain examines how computing technology has been used to neutralize the threat that black people pose to the existing racial order, but also how black people seized these new computing tools to build community and wage a war for racial justice. Join McIlwain for a centralized story of African Americans’ role in the internet’s creation and evolution, illuminating both the limits and possibilities for using digital technology to push for racial justice in the United States and across the globe.

Charlton McIlwain is Vice Provost of Faculty Engagement & Development at New York University, and Professor of Media, Culture, and Communication at NYU’s Steinhardt School. He is also the Founder of the Center for Critical Race & Digital Studies, and the co-author of Race Appeal: How Candidates Invoke Race in U.S. Political Campaigns, winner of the 2012 APSA Ralph Bunche Award.

Kamal Al-Mansour founded AfroLink Software in 1990, a pioneering African American electronic bulletin-board system, the first of its kind in the nation, that aimed to increase black awareness of the power of personal computers. Now, an artist and visual culturalist, his exhibitions have been seen at Northern Illinois University Art Museum, Reece Museum, and Vanderbilt University’s Black Cultural Center, among other institutions.