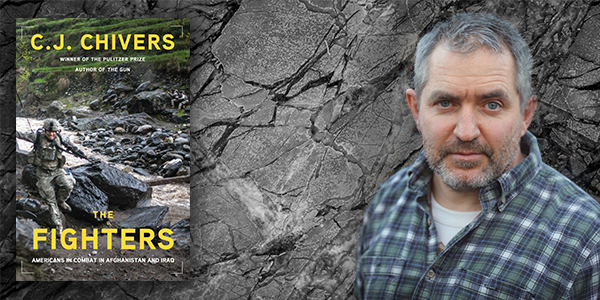 More than 2.7 million Americans have served in Afghanistan or Iraq since September 11, 2001. Reporter C.J. Chivers has served as a correspondent for both of these conflicts from the start, and he brings that perspective to Town Hall to present a vivid recollection of the physical and emotional experience of war, collected in his book The Fighters.

Chivers meets onstage with interlocutor Patricia Murphy, longtime reporter at KUOW with a background in coverage of veterans’ affairs. Together, Chivers and Murphy explore the realities of conflict as lived by six combatants: a fighter pilot, a corpsman, a scout helicopter pilot, a grunt, an infantry officer, and a Special Forces sergeant. Chivers shares the stories of their courage, commitment, sense of purpose—and ultimately their suffering, frustration, and moral confusion as new enemies arose and invasions gave way to counterinsurgency duties for which American forces were often not prepared.

Join Chivers and Murphy for a human portrait of modern warfare—told with the insight of a frontline reporter and the empathy and understanding of a veteran.

Admission to this event is free for all U.S. veterans.