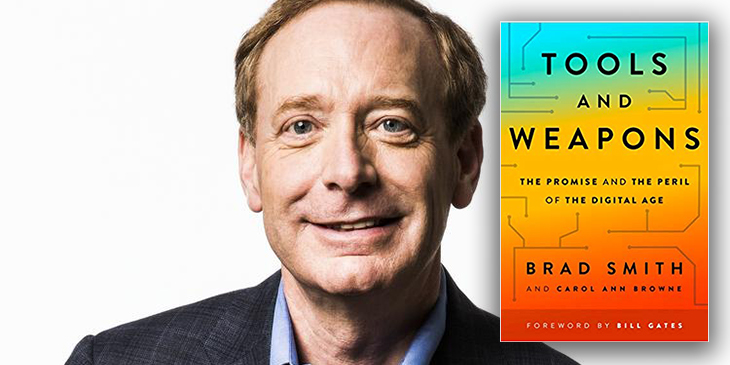 Microsoft President Brad Smith operates by a simple core belief: When your technology changes the world, you bear a responsibility to help address the world you have helped create. He steps up to Town Hall’s stage—in conversation with GeekWire’s Monica Nickelsburg—with insight from his co-written book Tools and Weapons, expounding on this vision and confronting a tech sector long obsessed with rapid growth and sometimes on disruption as an end in itself. Smith comments on a world that has turned information technology into both a powerful tool and a formidable weapon, and contends that new approaches are needed to manage an era defined by even more powerful inventions like artificial intelligence.

Smith brings us perspective from one of the world’s largest and most powerful tech companies as it faces challenges that come with no preexisting playbook—issues of privacy, cybercrime and cyberwar, social media, the moral conundrums of artificial intelligence, and big tech’s relationship to inequality. Join Smith and Nickelsburg as they pull back the curtain to some of Microsoft’s most crucial decision points—and the drive to protect the hopeful aspects of technology from the threats it presents.

Brad Smith is Microsoft’s President, where he leads a team of more than 1,400 business, legal and corporate affairs professionals working in 56 countries. He spearheads the company’s work on critical issues involving the intersection of technology and society, including cybersecurity, privacy, artificial intelligence, human rights, immigration, philanthropy, and environmental sustainability.

Monica Nickelsburg is GeekWire’s Civic Editor, covering technology-driven solutions to urban challenges and the intersection of tech and politics. Before joining GeekWire, she worked for The Week, Forbes, and NBC. Monica holds a BA in journalism and history from New York University.