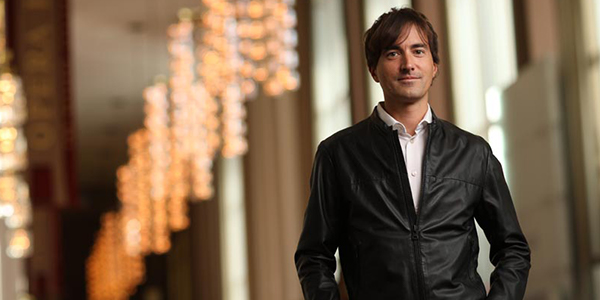 Named Musical America’s Composer of the Year in 2018, Mason Bates (creator of the Grammy Award-winning opera hit The (R)evolution of Steve Jobs) has become one of the most-performed modern composers of the 21st century. For the final concert in our Town Music series we’re presenting a night of pieces by Mason Bates alongside a selection of works by Johann Sebastian Bach, showcasing an ambitious convergence of musical canon and cutting-edge modern repertoire.

Bates’ symphonic music is the first to receive widespread acceptance for its unique integration of electronic sounds, and he is known for weaving theatrical stories into his performances. His work is evocative of Bach, who suffused his compositions with fugue and counterpoint to create motifs of action that conspired to form musical stories. Join us for a night of Town Music that transports us from the hallowed works of J.S. Bach to the electronic masterpieces of Mason Bates.

Composer of the Grammy-winning opera The (R)evolution of Steve Jobs, Mason Bates serves as the first composer-in-residence of the Kennedy Center for the Performing Arts.  His music fuses innovative orchestral writing, imaginative narrative forms, the harmonies of jazz and the rhythms of techno, and his symphonic music is the first to receive widespread acceptance for its unique integration of electronic sounds, and he was named the most-performed composer of his generation in a recent survey of American music. His activities as a DJ have highly informed not only his compositional approach, but his distinctive curating projects.  Bates has become a visible advocate for bringing new music to new spaces, whether through institutional partnerships such as his former residency with the Chicago Symphony Orchestra, or through his club/classical project Mercury Soul, which transforms commercial clubs into exciting hybrid musical events.  He has also composed for films, including Gus Van Sant’s The Sea of Trees starring Matthew McConaughey and Naomi Watts.