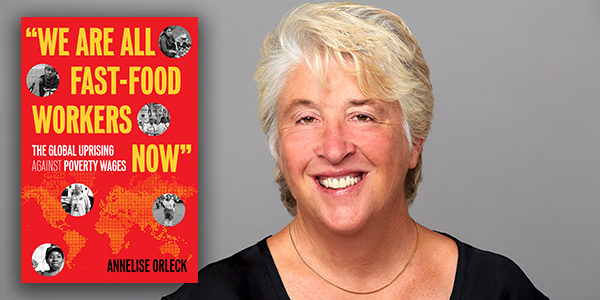 Listen to our pre-event interview with Annelise on our digital stage.

In May of 2014, thousands of fast food workers in 230 cities across the globe went on strike, protesting for a living wage, workplace protections, and the right to unionize. Today that fight persists in the form of the #FightFor15 movement, whose efforts have resulted in cities around the nation (including Seattle, New York City, and Los Angeles) instituting a rise to a $15 minimum wage. History professor and activist Annelise Orleck chronicles the fight for a living wage and the results of this worldwide working-class outcry in her book We Are All Fast-Food Workers Now: The Global Uprising Against Poverty Wages. She is joined onstage by Heidi Groover, a housing and labor journalist for The Stranger, to discuss Orleck’s interviews with activists in many US cities and countries around the world—including Bangladesh, Cambodia, Mexico, South Africa, and the Philippines. Together, Orleck and Groover trace this new labor movement sparked and sustained by low-wage workers from across the globe, and reflect on hope and change as it rises from the bottom up. Join Orleck and Groover for an urgent, illuminating look at globalization as seen through the eyes of fast-food servers, retail workers, hotel housekeepers, airport workers, and adjunct professors who are fighting for respect, safety, and a living wage.

Annelise Orleck is professor of history at Dartmouth College and the author of five books on the history of US women, politics, immigration, and activism, including Storming Caesars Palace: How Black Mothers Fought Their Own War on Poverty and Rethinking American Women’s Activism.

Heidi Groover is a staff writer at The Stranger who covers housing and labor. She has previously served as a writer for The Pacific Northwest Islander and as News Editor at the Montana Kaimin.