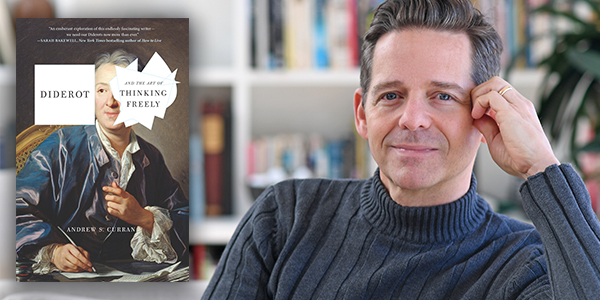 Denis Diderot is often associated with the decades-long battle to bring the world’s first comprehensive Encyclopédie into existence. But his most daring writing took place in the shadows. Andrew Curran, professor of Humanities and French at Wesleyan University, makes his way to Town Hall’s stage to deliver insight from Diderot and the Art of Thinking Freely, a spirited biography of the prophetic and sympathetic philosopher who helped build the foundations of the modern world.

Curran shows us a comprehensive portrait of Diderot—his tormented relationship with Rousseau, his curious correspondence with Voltaire, his passionate affairs, and his often iconoclastic stands on art, theater, morality, politics, and religion. Curran tells us the ways which this 18th century French philosopher was centuries ahead of his time and challenged virtually all of his century’s accepted truths, from the sanctity of monarchy, to the racial justification of the slave trade, to the norms of human sexuality. Join Curran for a vivid account of a thinker whose works still edify us today.

Andrew Curran is the William Armstrong Professor of the Humanities and Professor of French at Wesleyan University. He is the author Diderot and the Art of Thinking Freely. His previous books include The Anatomy of Blackness: Science and Slavery in an Age of Enlightenment, and Sublime Disorder, Physical Monstrosity in Diderot’s Universe.