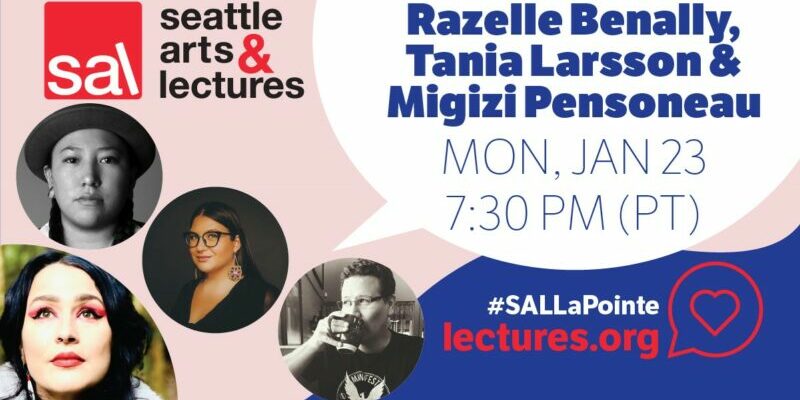 Join Sasha LaPointe and three more Institute of American Indian Arts alumni as they discuss decolonizing Native image in art and pop culture, and the power of representation.

Razelle Benally, an Oglala Lakota/Diné film director and writer, is dedicated to creating stories with strong Indigenous female protagonists. Tania Larsson, a Gwich’in and Swedish creator of fine jewelry, uses materials from her home in the Canadian Arctic. Migizi Pensoneau, an Ponca/Ojibwe writer and producer, works on the shows Reservation Dogs, Barkskins, and Rutherford Falls.

Razelle Benally is an Oglala Lakota/Diné film director and writer who holds a BFA from the Institute of American Indian Arts and an MFA in Film Production at New York University’s Tisch School of the Arts. She was a 2015 Sundance Institute NativeLab Short Film Production Fellow with her first short narrative I am Thy Weapon. In 2017, her two-hundred-dollar budgeted thesis film Raven traveled the international film festival circuit and found local success winning several awards including best short narrative at: the Santa Fe Independent Film Festival, Native Cinema Showcase, and the New Mexico Film Foundation.

Tania Larsson designs Gwich’in Fine Jewellery created with land-based materials. She is innovative, driven, and dedicated to her art. Through social media, she promotes her culture, work, and passion for reclaiming Indigenous knowledge. She earned a BFA from the Institute of American Indian Arts with a focus in jewelry and digital arts. She was the apprentice to renowned jeweler Keri Ataumbi for two years. Tania is one of the founding members of Dene Nahjo, an Indigenous innovation collective in Denendeh (Northwest Territories) working to advance social and environmental justice for northern peoples and promote Indigenous leadership.

Migizi Pensoneau (Ponca/Ojibwe) was born and raised in Minnesota and attended Wesleyan University in Connecticut. Migizi has worked for both major and independent production companies as a writer and a producer for film and television. He is the recipient of awards, commissions, fellowships, and grants from ABC/Disney, the Institute of American Indian Arts (where he currently teaches screenwriting in the MFA program), the Sundance Institute, and the Oregon Shakespeare Festival (with the 1491s, where they received a commission to do an original play, Between Two Knees), among others. Migizi has also covered scripts for Warner Brothers and the Sundance Institute and has written several published pieces on the interaction of Native Americans and popular culture.

Sasha LaPointe, SAL’s Community Curated Series director, is from the Upper Skagit and Nooksack Indian Tribe. Native to the Pacific Northwest, she draws inspiration from her coastal heritage as well as her life in the city. The author of Red Paint: The Ancestral Autobiography of a Coast Salish Punk, LaPointe writes with a focus on trauma and resilience, ranging topics from PTSD, sexual violence, the work her great grandmother did for the Lushootseed language revitalization, to loud basement punk shows and what it means to grow up mixed heritage. Her memoir Red Paint has received starred reviews from Kirkus and Shelf Awareness and has been named an NPR Best Book of the Year, A Nylon Must-Read Book of the Month, and more.

Seattle Arts & Lectures (SAL) cultivates transformative experiences through story and language with readers and writers of all generations. This event is part of SAL’s three-part Community Curated Series is directed in 2022/23 by Sasha LaPointe, the author of Red Paint: The Ancestral Autobiography of a Coast Salish Punk. Learn more about SAL programs here.