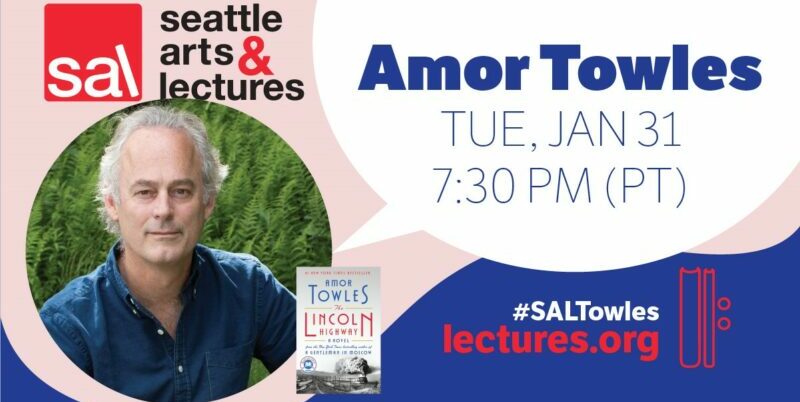 Amor Towles is the author of three runaway bestsellers: Rules of Civility, A Gentleman in Moscow, and now, The Lincoln Highway. After working as an investment professional for over twenty years, Towles turned full-time writer, penning massively successful works which deal in historical fiction but are at their core detailed character studies.

Lauded as “an exhilarating ride through Americana,” his new novel tells the story of a 1950s road trip gone awry, populated by an eclectic cast of characters, from drifters who make their home riding the rails and larger-than-life vaudevillians to the aristocrats of the Upper East Side.

In June, 1954, eighteen-year-old Emmett Watson was driven home to Nebraska by the warden of the juvenile work farm where he had just served fifteen months for involuntary manslaughter. His intention was to pick up his eight-year-old brother, Billy, and head to California where they can start their lives anew.

But when the warden drives away, Emmett discovers that two friends from the work farm have stowed away in the trunk of the warden’s car. Together, they have hatched an altogether different plan for Emmett’s future, one that will take the four of them on a fateful journey in the opposite direction to the city of New York. Spanning ten days and told from multiple points of view, Towles’s third novel is a multilayered tale of misadventure and self-discovery.

Amor Towles is the author of Rules of Civility (named one of the best books of the year by the Wall Street Journal), A Gentleman in Moscow (named one of the best books of 2016 by the Chicago Tribune and the Washington Post among other publications), and The Lincoln Highway. Together, his works have sold more than five million copies and been translated into more than thirty languages. Towles’s short stories have appeared in the Paris Review, Granta, British Vogue, and Audible Originals. Towles also wrote the introduction to Scribner’s 75th anniversary edition of F. Scott Fitzgerald’s Tender is the Night, and the Penguin Classics edition of Ernest Hemingway’s The Sun Also Rises.

Seattle Arts & Lectures (SAL) cultivates transformative experiences through story and language with readers and writers of all generations. This event is part of their SAL Encore series. Learn more about SAL programs here.