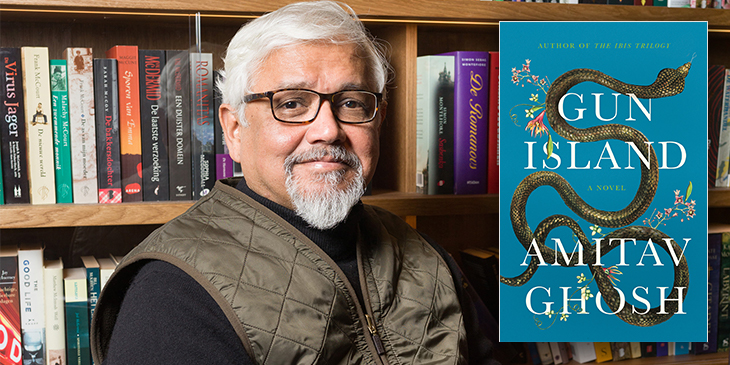 Lauded author Amitav Ghosh arrives on Town Hall’s stage to present his newest book, Gun Island. His novel focuses on Deen, a dealer of rare books who is used to a quiet life spent indoors. But as his once-solid beliefs begin to shift, he is forced to set out on an extraordinary journey; one that takes him from India to Los Angeles and Venice via a tangled route through the memories and experiences of those he meets along the way.

There is Piya, a fellow Bengali-American who sets his journey in motion; Tipu, an entrepreneurial young man who opens Deen’s eyes to the realities of growing up in today’s world; Rafi, with his desperate attempt to help someone in need; and Cinta, an old friend who provides the missing link in the story they are all a part of. It is a journey that will upend everything he thought he knew about himself, about the Bengali legends of his childhood, and about the world around him. Sit in for an exploration of Ghosh’s beautifully realized globetrotting, folkloric adventure, a story of family and heritage, of a search for belonging in a destabilized world—and of a man whose faith in the world and the future is restored by two remarkable women.

Amitav Ghosh is the author of the acclaimed and bestselling Ibis trilogy, which includes Sea of Poppies (short-listed for the 2008 Man Booker Prize), River of Smoke, and Flood of Fire. His other novels include The Circle of Reason, which won the Prix Médicis étranger, and The Glass Palace. Ghosh holds two Lifetime Achievement awards and four honorary doctorates. In 2007 he was awarded the Padma Shri, one of India’s highest honors, by the President of India.