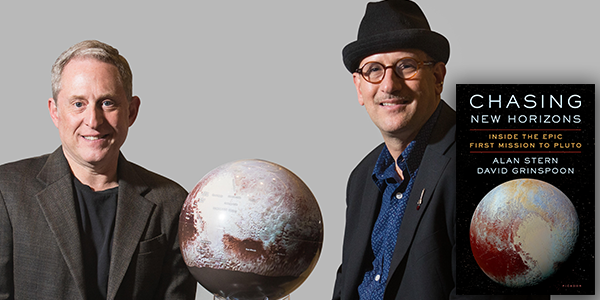 Imagine a roughly minivan-sized space probe screaming through space at more than 32,000 miles per hour more than 3 billion miles from Earth, focusing its instruments on the long mysterious icy worlds of the Pluto system. This is the life of the NASA spacecraft New Horizons. To lend us understanding into this once-in-a-generation mission, Town Hall brings two space experts—Alan Stern and David Grinspoon. With insight from their new book Chasing New Horizons: Inside the Epic First Mission to Pluto, Stern and Grinspoon outline the triumphs and challenges of this raw exploration of new worlds, unparalleled since NASA’s Voyager missions to Uranus and Neptune.

They tell the story of the men and women behind the New Horizons mission, their decades-long commitment, the political fights within and outside of NASA, and the sheer human ingenuity it took to design, build, and fly the mission. They outline the science, politics, egos, and public expectations that fueled the greatest space mission of our time, and reveal plans for New Horizons’ next encounter 1 billion miles past Pluto. Join Stern and Grinspoon for a riveting insider’s story of scientific discovery, and a testament to the extent of human capabilities when a group of inspired experts work together toward their incredible goal.

Dr. Alan Stern is Principal Investigator of the New Horizons mission. A planetary scientist, space program executive, aerospace consultant, and author, he has participated in 29 NASA space missions and has been involved at the highest levels in most aspects of American space exploration.

Dr. David Grinspoon is an astrobiologist and planetary scientist, award-winning science communicator, and prize-winning author. In 2013 he was appointed the inaugural Chair of Astrobiology at the Library of Congress. He is a frequent advisor to NASA on space exploration strategy, and is on the team for the Curiosity Mars Rover. Grinspoon’s previous books include Earth in Human Hands and Lonely Planets and his writing has appeared in the New York Times, Slate, Scientific American, Los Angeles Times, and others.