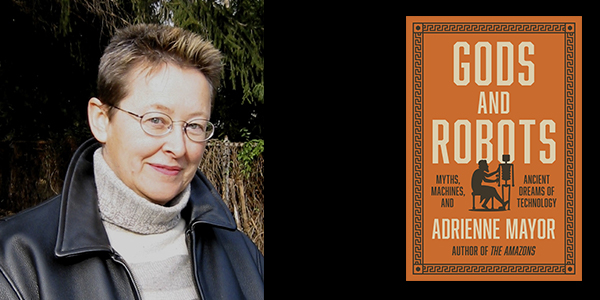 The first robot to walk the earth was a bronze giant called Talos. This wondrous machine was created not by MIT Robotics Lab, but by Hephaestus, the Greek god of invention. For a history on these ancient mythological AIs and more, folklorist and historian of science Adrienne Mayor arrives at Town Hall to present Gods and Robots: Myths, Machines, and Ancient Dreams of Technology. She brings us a richly illustrated exploration of mythology and the history of humanity’s timeless impulse to create artificial life.

Mayor relates fascinating stories of ancient Greek, Roman, Indian, and Chinese myths that envisioned artificial life, automata, self-moving devices, and human enhancements, and how these visions relate to and reflect the ancient invention of real animated machines. She reveals how some of today’s most advanced innovations in robotics and AI were foreshadowed in ancient myth―and how science has always been driven by imagination. Join Mayor for a collection of myths for the AI age, and a retrospective on humanity’s dreams of creating artificial life.