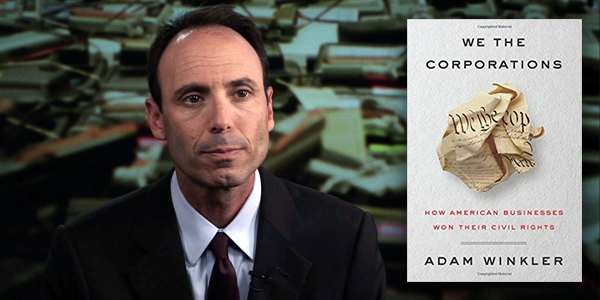 In 2010, a controversial Supreme Court decision granted American corporations nearly all the same constitutional rights as ordinary citizens. With insight from his book We the Corporations: How American Businesses Won Their Civil Rights, constitutional law expert Adam Winkler chronicles a corporate civil rights movement two hundred years in the making. He presents us with a history of the battle over constitutional protections for business, and a groundbreaking portrait of a corporate seizure of political power in America. Winkler exposes how the nation’s most powerful corporations gained our most fundamental rights, turned the constitution into a bulwark against the regulation of big business, and redefined the boundaries of our civil liberties to serve the ends of capital. Join us for a discussion on the scope of our inalienable rights and the ramifications of corporate personhood.

Adam Winkler is a professor at UCLA School of Law, where he specializes in American constitutional law. His scholarship has been cited by the Supreme Court of the United States, and his writing has appeared in the New York Times, Wall Street Journal, Washington Post, Los Angeles Times, New Republic, Atlantic, Slate, and Scotusblog.