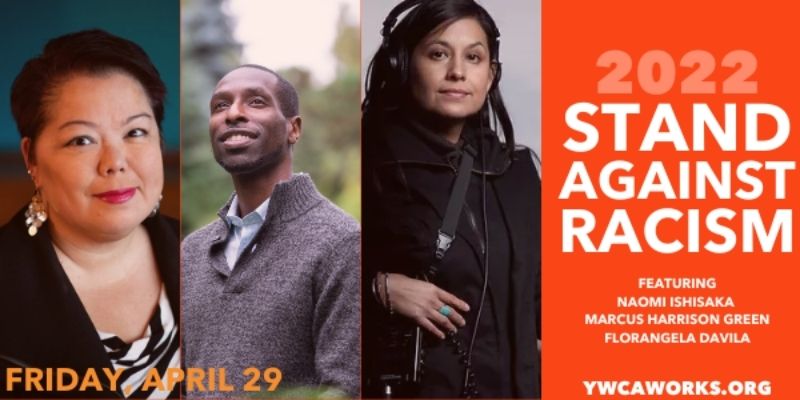 Join the YWCA and Town Hall Seattle for an afternoon discussion about the harmful effects of institutional and structural racism in our community. This virtual event is FREE but registration is requested.

This year’s theme is Race, Media, and Gender and will feature a discussion amongst panelists Naomi Ishisaka (The Seattle Times), Marcus Harrison Green (South Seattle Emerald), and Florangela Davila (KNKX). We will also showcase two local media outlets, The Seattle Medium and Converge Media, in a video about Black media in Seattle’s past, present, and future.

This year marks the 11th anniversary of the Stand Against Racism event in Seattle, hosted by the People of Color Executive Council (POCEC) of YWCA Seattle | King | Snohomish.

Register now for this free event — you don’t want to miss this critical conversation.

Naomi Ishisaka is the Assistant Managing Editor for Diversity, Inclusion and Staff Development and the Social Justice Columnist for The Seattle Times. She is a journalist and photographer who focuses on racial equity and social justice

Marcus Harrison Green is the publisher and founder of the South Seattle Emerald and a columnist with The Seattle Times. He was awarded the Seattle Human Rights Commissions’ Individual Human rights Leader Award in 2020.

Florangela Davila is a journalist who works across media: print, broadcast, online, and the stage. After 16 years in newspapers, she made the leap to public radio as a reporter and producer launching a weekly arts feature at KPLU-FM (now KNKX) and now serves as the News Director for KNKX.

About the Stand Against Racism

Every year in April, the Stand Against Racism brings together YWCA and our partners across the country to raise awareness of institutional and structural racism, and build community among people working for racial justice.

Stand Against Racism is a signature campaign of YWCA USA, and part of our larger strategy to fulfill YWCA’s mission of eliminating racism and empowering women. To learn more, please visit standagainstracism.org.